Moms Recipe Tips and Substitutions for using Molasses as a Sweetener

Baking with Molasses As a Sweetener

Molasses has a rich, dark, sweet taste and is used in cakes, cookies and other savory sweet recipes.  It is created during the sugar refining process.  It is slightly less sweet than granulated sugar.  Refined sugar used to be an expensive luxury item, putting it out of reach in the average pantry.  Until sugar prices fell in the 1930’s, the more affordable molasses was the primary sweetener used in American kitchens.

When Grandma’s Recipe Calls For Molasses

If you are cooking a retro recipe I heartily recommend you spring for a jar of molasses.  This dark, sweet syrup is the secret ingredient in many cookies, cakes, ham glazes and BBQ sauces.  Granulated sugars will not taste exactly the same, and some holidays just aren’t complete without a vintage family recipe. Here are some tips on using molasses in your recipes.

What is Unsulphured Molasses Anyway?

Sulphur dioxide is sometimes used to make molasses sweet.  The term ‘unsulphured molasses’ just means that sulphur was not used in the creation of your molasses and therefore, it should be the lightest and sweetest type.

Measuring is easier (and more accurate) if you grease the measuring cup first with a little cooking spray or butter.

Another molasses trick is to measure the molasses in the same measuring cup as your liquid.  This is called:

This method is easier than it sounds.  Say your recipe uses 3/4 liquid and 1/4 cup of molasses.  First, pour the liquid up to the 3/4 cup line.  Then add your molasses until it measures 1 cup.  It will be accurate and shouldn’t stick to the measuring cup.

Baking tip:  If you still have room in the measuring cup, add any other wet ingredients in your recipe and mix everything together before adding it to the dry ingredients.  You will get a better mixed batter and a more even taste and texture in your baked goods.

Ideas For Using Up Leftover Molasses
So, you bought a jar for that one special recipe.  It was great, but now what?  If you have part of a jar left over, grandma would want you to use up that rich molasses, and not let it go to waste.  Try mixing a few tablespoons of that savory, sweet smoky goodness into baked beans, as part of a ham glaze, or mixed in with BBQ sauce.  Try a teaspoon to sweeten coffee, mixed in with your pancake or waffle batter, drizzled on oatmeal or ice cream.  You can also mix it with syrup and butter on pancakes.

Molasses Health Tip
One tablespoon of molasses provides 8% of your daily recommended iron and 4% of your calcium!

One cup of molasses equals 1 cup honey.  Bear in mind honey is sweeter than molasses and will change the flavor slightly.

OR instead of 1 cup of molasses try 3/4 cup granulated sugar  (brown is preferable) plus 1/4 cup water.  The extra water (or other liquid) is used to make up for the moisture in molasses needed in the recipe.  It is especially important to replace it if you’re baking cakes or breads.

Blackstrap molasses is the thickest, darkest and  least sweet type of molasses and isn’t recommended for baking.

Here’s a great old-fashioned recipe for Corn Cake using molasses as a sweetener.

Mix dry ingredients together in a bowl.  Add milk with molasses, egg well beaten, and butter.  Bake in shallow buttered pan (roughly 9×9 or 8×8) in 425 degree oven for twenty minutes. 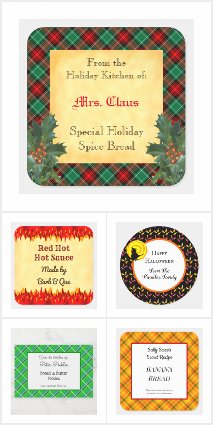 Retro Custom Baking and Canning Stickers and Tags
by MomsRetro and AngelCityArt
Thanks for dropping by! We use cookies to ensure we give you the best experience on our website. If you continue to use this site we'll assume that's OK.OkNo